The Fabrica 2.0 from Nano Dimension’s Fabrica Group has a smart, adaptive optical system that confirms its position after every layer, sharpening detail to a pixel size of 1.9 microns, which, combined with a layer thickness of 1 micron, enables it to produce accurate, high resolution micro parts. Photo Credit: Nano Dimension.

Making micro plastic parts is a complex process that requires highly specialized equipment and knowledge. One of the biggest challenges for these parts is prototyping. Traditionally, the only available methods have been the same processes used for full-scale production: machining tool steel molds for multiple design iterations that might differ by only a few microns. “Rapid tooling for micro molding has been kind of the elusive spot in the marketplace puzzle to solve,” says Aaron Johnson, vice president of marketing and customer strategy at Accumold, a company with 35 years of experience in producing micro injection molded plastic parts.

For most of that history, 3D printing has not been able to achieve the small scale, fine details and tight tolerances that Accumold requires. But as 3D printing has advanced, so has the field of micro 3D printing, and Accumold now has a new tool for speeding the protopying process: a Fabrica 2.0 DLP micro system from Nano Dimension.

A Big Market for Little Parts

Accumold was started by two toolmakers who saw a need for micro plastic parts, but not a system on the market that could handle the required part sizes and tolerances. Leveraging their toolmaking experience as an advantage, they created a micro injection molding system with the efficiency, speed and accuracy of a traditional injection molding system.

Since the company was founded, microelectronics has grown to be come its largest market. “Think about all of the devices that have electronics in them today that didn’t 35 years ago, or even just a few years ago,” Johnson says. “It’s everything from automotive to consumer electronics to high-end medical devices.”

Today, the company offers a range of services to support production of micro plastic parts, including mold design, building and maintenance; part production; inspection; sub-assembly; and packaging. All of its work is considered to be “micro” in at least one of three ways (but “In a lot of cases, it’s all three,” Johnson says).

Accumold’s first foray into 3D printing was a small SLA system, which is employed for fixing and some prototyping. However, the company had been watching the 3D printing market for 10 years before the technology seemed viable as an alternative to micromachining for prototypes. “In order for it to fit well with our customers, it had to get close to what we could produce from a molding standpoint,” he says. “That’s why they come to us, for the high-precision, high-accuracy things. So the prototype side of that has to go hand in hand with that.” 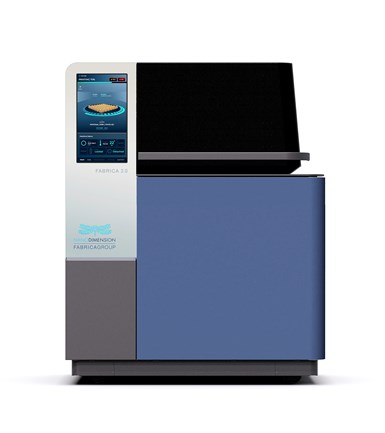 One feature that drew Accumold to the Fabrica 2.0 was the machine’s 50 by 50 by 100-millimeter build plate. This might seem small, but as Johnson notes, when you’re working with micro parts, that’s “a lot of good real estate to work with in high precision.” Photo Credit: Nano Dimension

The Fabrica 2.0 arrived in June 2021. It’s a digital light processing (DLP) system, which uses a digital light projector to solidify parts within a vat of liquid photopolymer resin. Its smart, adaptive optical system adjusts and confirms its position after every layer, sharpening detail to a pixel size of 1.9 microns, which, combined with a layer thickness of 1 micron, enables it to produce accurate, high-resolution micro parts. 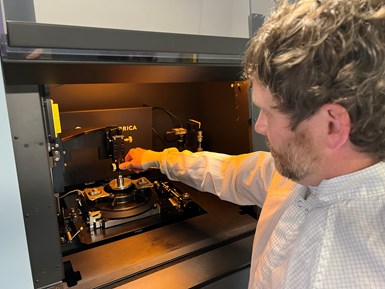 Chris Hunt, Accumold’s director of additive manufacturing, at the shop’s recently acquired Fabrica 2.0 micro 3D printing system. The company believes that 3D printers like this one can fill a need for rapid tooling and prototyping in the production of micro plastic parts. Photo Credit: Accumold.

Putting the Machine to Work

Although prototypes are destined to be molded, they are different in some respects. “You have to think through critical surfaces and best orientation for the printing so that the part ultimately comes out the way the prototype needs to work,” Johnson says.

3D printed mold inserts also need minimal post processing. In fact, Johnson says that mold inserts are often good enough to start using right off the printer. However, 3D printed mold tooling doesn’t last as long as traditionally produced mold tooling, and Accumold is still working out what exactly its limits are. Johnson explains that it depends on a lot of factors, including the type of material being used, how delicate the features are and the mold’s accuracy, but it could range anywhere from 10 to 1,000 shots. He says that, right now, field tests and anecdotal evidence show that these molds can produce enough parts for R&D or form, fit and function tests, but can’t reach commercial volumes.

Accumold is also exploring other ways to leverage the advantages of 3D printing for mold tooling, such as conformal cooling channels. “There are all sorts of other cool, innovative things that you could do from a tooling standpoint that we’ll explore,” Johnson says.

The micro 3D printer has also proven useful for other internal tooling projects, including fixtures and end effectors for automation systems (which are mostly used in its subassembly and packaging work). Because all of the parts Accumold produces are very tiny and/or precise, all of its fixtures and end effectors need to be tiny and/or precise as well, and the Fabrica 2.0 is well-suited to this work.

3D printing has reduced prototype production time from weeks to days, Johnson says. As an example, he cites a microfluidic project involving a component that was eventually going to be injection molded, but the customer still needed to determine the shape and height of the component. Accumold was able to 3D print several different iterations for testing. “It sped that process up immensely, and was very successful in getting that project launched on time,” he adds.

However, these capabilities are still very new for Accumold. The shop is still working to figure out exactly what tolerances the machine can hold (although this could vary depending on the project, as Johnson notes). And even though it has been successful in keeping the machine running around the clock, growing demand for these services remains a priority. Likewise for determining out how much capacity to devote to prototype parts, how much to devote to 3D printed mold inserts and how much to devote to internal tooling. All of this will depend on its customers’ needs. “Our main objective right now is to support our customers’ path to commercialization, whatever that looks like, as best we can,” Johnson says. “And we’re excited to see where the technology takes us otherwise.”